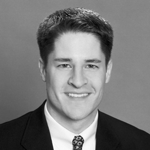 John began working for Blaske & Blaske in 1995 as a clerk and immediately knew what he wanted to do for his career. Practicing law, he saw, was an opportunity to make a positive difference and help people in need.

Returning to Ann Arbor with academic honors from the University of Wisconsin Law School in Madison, Wisconsin, John joined Blaske & Blaske as an attorney in 2004. After nearly fifteen years in practice, John has served hundreds of clients and worked closely with Tom to secure positive resolution in a wide range of legal and medical malpractice cases, complex personal injury cases, and business litigation cases.

John brings focus, dedication, and a deep ethical understanding to every case. In fact, as he was completing law school, he received the Wisconsin Lawyers Mutual Insurance Company award for the Top-Ranking Law Student in Professional Responsibilities (legal ethics). He has written about legal ethics and other topics for the Institute of Continuing Legal Education, and he has long served as a judge for the Michigan High School Mock Trial tournament.

Although he grew up in Ann Arbor, John remains devoted to the University of Wisconsin, where he not only attended college and law school, but met his wife, Stacy. Together, they are raising two children. John enjoys playing soccer, chess, and reading American history.