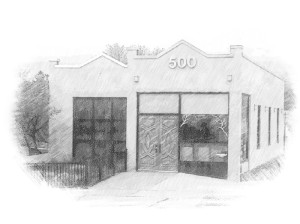 Constructed in 1926 as a tire company and auto repair shop, our building housed Michigan Glass from 1965 until 2005, when the owners closed their business at this location.

About this time, we were looking for new office space, as was our friend and fellow lawyer Charles M. Groh. We decided to look for a space together where both of our firms could relocate. When we saw the Michigan Glass building, it didn’t look much like a lawyer’s office, with its giant hoist, plank floors, dark and dusty basement, and antiquated plumbing and ventilation. But we had a vision.

We preferred preserving and transforming an old downtown building rather than razing it and starting from scratch. We believe in downtown, and we wanted to be good stewards of this place that has served other local businesses for many decades. With the help of architect Marc Rueter and builder John Alexander, we transformed this well-built 1926 structure into a functional and beautiful place to work, emphasizing elegance, history, and community—values we think every lawyer should cherish. 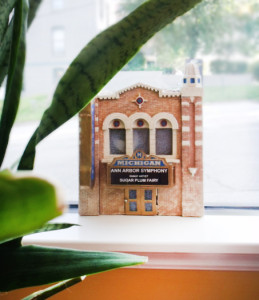 The result is a welcoming, lovely place to meet with you. It is also, we hope, an inspiration for local development. Since we moved in, our building has been featured on both the Old West Side Association Homes Tour and the Ann Arbor City Club Home Tour.

Our renovations included floor-to-ceiling windows where the garage doors used to be, offices painted in bold colors, coffered ceilings, skylights, a fully finished lower level with a kitchen and library, and an original mural of 1860s Ann Arbor in the conference room.

The law firm also featured two fairy doors in the lobby and conference room, part of an Ann Arbor phenomenon. The office walls were graced with original Emil Weddige lithographs collected by Tom’s father-in-law. The bathroom featured local Motawi art tiles and more Weddige works. Hanging in the work room is a 1918 “Judge of Probate” transom which originated in Calhoun County, where Tom’s father was the Judge of Probate. 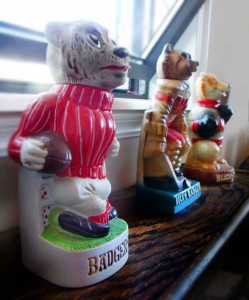 Tom’s office was filled with antiques and artifacts, including barrister cabinets, a violin signed by U-M football coaches Lloyd Carr and Brady Hoke, and a few antique glass bottles that Tom saved from his parents’ collection before the remainder were auctioned to provide scholarships to college students.

The lower level, which housed the law offices of Charles M. Groh, was designed with Japanese influences and artwork. The back door led to a fenced brick patio with a graceful copper beech tree where the Blaske and Groh dogs were often found sunning themselves while everyone else was hard at work.

Just click on one of the photos below to open a Photo Gallery to see the building as it was and how it is today.

The fairy door in our conference room. Ann Arbor is home to dozens of fairy doors.